Experience in a museum: Making a natural phenomenon explorable

TheFœhnThing is an interactive simulation made for the context of a museum. It aims to make the phenomenon of foehn winds (e.g. appearing at the Alps) explorable in a joyful, inviting way. The result combines a colourful, eye-catching design with an exact weather simulation based on data entered by the user.

The overall goal of TheFœhnThing is to provide not just the passive experience of watching but giving the user the chance to actually change what he sees - to recreate the displayed simulation based on the start temperature and saturation or mountain shape and wind direction he enters through to an intuitive, simple user interface.
The idea behind is to arouse curiosity by letting the user just play with the simulation in the first place addressing his playful instinct. In the second step the simulation provides information which are perfectly tailored to explain the situation the user just created, mixing calculated data (such as the temperature on a spot chosen by the user) with short, informative, easy-to-read texts.

The simulation is implemented with the game engine Unity 3D and written in C# based on scientific formulas in terms of alteration of temperature and saturation. Additionally a self-developed simple flow simulation is applied to illustrate the change of altitude depending of the mountain's shape.
To be able to implement this in such an exact way a lot of research had to be done as well as making decisions in which parts the simulation had to be exact and in which approximation would be enough without a loss of understandability.
For actually displaying the simulation a particle system with a self-developed behaviour is used in combination with a huge 3D model based on adapted real world elevation data.

Additionally to a public presentation at my university the project was part of the month-long exhibition 'Station Heimat' and has been exposed on different fairs and exhibitions (such as the hobit 2014 and push conference 2015).

In this project I switched between the roles of a project manager, concept designer and lead developer. 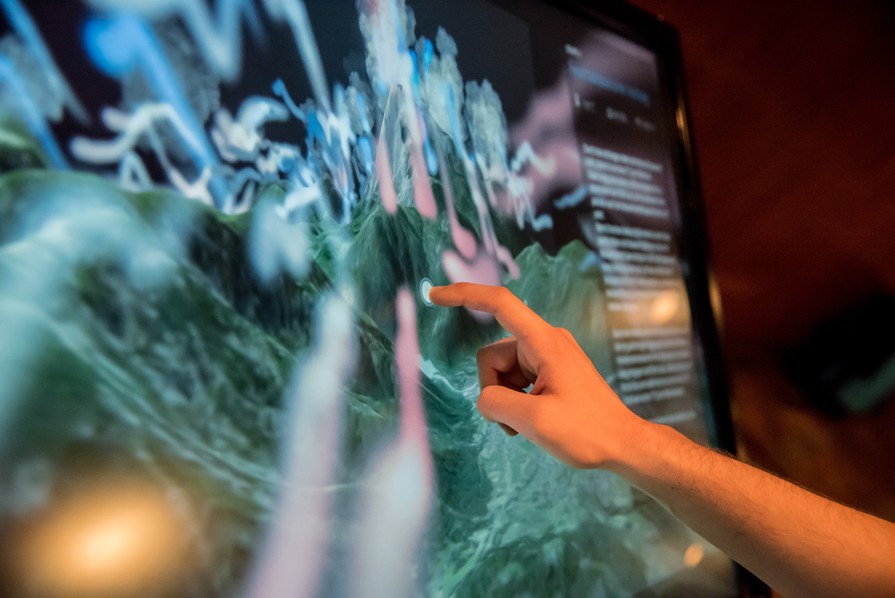